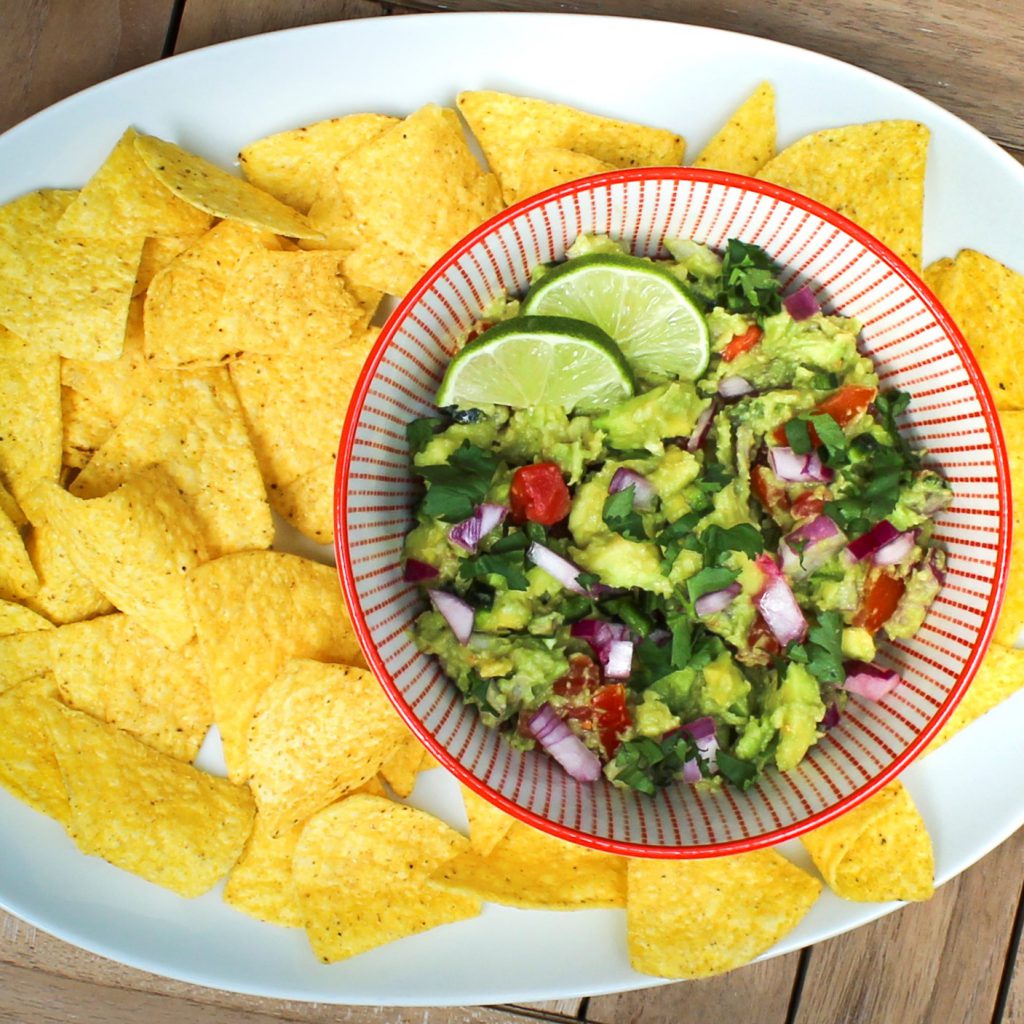 The recipe for the most delicious lemon guacamole you will find here. If you eat guacamole, you eat history. The guacamole was already made by the Aztecs in the 15th century. “Ahuaca-mulli” was called the time when the Spaniards colonized South America and attributed aphrodisiac properties to it. The Spaniards tried to get guacamole at home with the conquered avocados. But she did not succeed. However, their “great” performance has succeeded in getting guacamole to Central America. Only much later, in the 1970s, North Americans learned about guacamole through the arrival of Hispanics on the labour market. Since then guacamole or guac, in short, has been a hit with even its own holiday (September 16) and a Facebook page. Guacamole has also become a success in Europe after the United States. You can buy ready-made guacamole in every supermarket, but making yourself is so much better.
This variant is with lime and with a somewhat hot jalapeño added to it. The lime juice and coriander give it a fresh twist. With some tortilla chips there you have the ultimate snack in no time.

For this guacamole you need the following ingredients:
3 avocados, ripe but not too ripe
1 large tomato
½ red onion
1/2 lime
½ jalapeño
Coarse sea salt to taste.
Half bunch of coriander
Tortilla chips

Halve the avocados, remove the kernel and spoon the pulp from the peel and put in a bowl. Nice to talk, but not too. Personally, I like it when the guacamole is still quite coarse, so no puree. Cut the tomato into pieces and add it to it. Just like the red onion that you cut just a bit finer. The jalapeño cut you as finely as possible. Squeeze a lime above the bowl. Stir everything together and season with some coarse sea salt. Then cut coriander over it. Make sure that the hard stalks do not get into your guac. It is nice to put a slice of lime on the bowl for decoration.
It is nice to serve with some tortilla chips, but with baguette is also possible. It is nice to serve the guacamole with some tortilla chips, but with baguette is also possible. Also very tasty as a snack is the Artichoke and peas houmous.

What a beautiful day today ❄ #winterweer#ijspret

Although cold and rainy, the outdoor training was

The sun is shining, and its weekend. Hope you have

I took a long walk with sasha and lulu this mornin

Sometimes you come across such beautiful things in

I like simple and tasty food, and it should also b

My gear for a home workout 🤩. As long as I can'