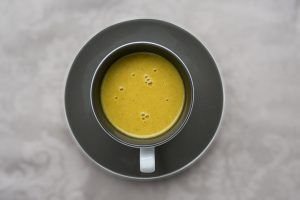 You can find the recipe for the most delicious Golden Milk here. I was not a tea drinker at all, and I confess, not even a milk drinker until I came across the Golden Milk recipe or Tumeric Tea a few years ago. The recipe sounded exciting and out of curiosity and because I was reading about turmeric (which gives it the yellow golden colour), one of the ingredients of Golden Milk, I tried it. I liked it very much right away, and wanted to make my own golden milk from this great drink. After trying different variations, I came to this recipe.

It is not difficult to make and is, thanks to the combination of ingredients not only very tasty, but also very healthy.
Turmeric, or Yellow root, is known for its medicinal effect. It contains curcumin, which has an anti-inflammatory effect and has a positive effect on the brain. It would also reduce the risk of cardiovascular disease and help fight cancer.
Ginger also works anti-inflammatory, can improve brain functions, and works against nausea and flu.

For this recipe you need:
2 cups of almond or coconut milk
1 teaspoon of turmeric
½ teaspoon of cinnamon
1 teaspoon of honey or maple syrup
Freshly ground black pepper
A piece of ginger of a few centimetres. (I always take off the skins)

Cut the ginger into very small pieces. Put the ginger in a mortar and fry the ginger. Then add the turmeric, cinnamon, honey or maple syrup, black pepper and mix well. Put the almond or coconut milk in a saucepan and add the mixture. Heat the whole for three to five minutes on a medium heat. Stir frequently but do not bring it to a boil.

You can drink the Golden Milk directly. I prefer to drink this delicious drink in the evening. After drinking you will sleep wonderfully. If you’re still looking for a hot and healthy drink, check out the  Vegan Chai Tea Latte recipe that’s definitely worth a try.