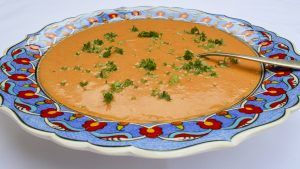 Classic Gazpacho is the perfect soup for a hot day. I think it is one of the tastiest Spanish dishes, it is light and fresh, but also good filling. The advantage is that it is very easy to make, and you do not have to stand over a warm fire on a hot day. There are many different Gazpacho recipes in circulation, but I think the classic version is the tastiest. It is originally a starter from the south of Spain, but you can also enjoy this soup in between (at a party or birthday it is also very nice to serve the soup in small glasses.)
Classic Gazpacho is best when it is eaten very cold.
You need a reasonable amount (for four people and then you have the same amount left for the next day):
1 kilo of well-ripened tomatoes
2 green peppers
1 cucumber
½ onion
2 tablespoons red wine vinegar or sherry vinegar
150 ml of olive oil
A few slices of dry white bread
2 cloves of garlic
¾ liters of water
Salt, pepper and cumin (to taste)

Soak the bread in some water. Cut the tomatoes, peppers, onions and peeled cucumber into pieces and put them in a food processor. Add the cloves of garlic, bread and olive oil as well. Puree until a smooth whole has formed. You will probably have to do it twice in the food processor as the quantity is too much to puree everything in one go.
Then mix the vinegar, pepper and salt with the mass. Put it in the refrigerator and let it cool for at least a few hours.

To give the soup a bit more body and also as a garnish, you can sprinkle black, sliced olives, crumbled hard boiled egg, small pieces of ham, spring onions and / or parsley over the soup. Croutons, homemade or not, complete the whole.
If you want to taste a nice summer soup, take a look at the cold cucumber soup